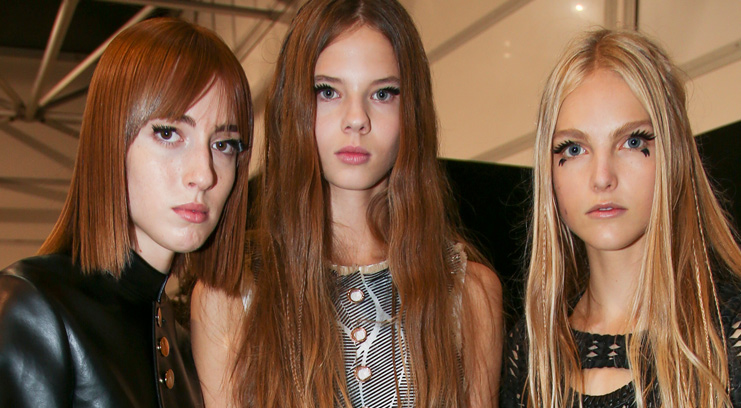 There’s nothing quite like looking to the spring/ summer catwalks to brighten up these still-grey winter days. Take a peek at some of the stand-out looks for the new season and get ahead of the trends by stockpiling these makeup bag must haves now.

Strobing as a trend is set to stick around for yet another season as models on the SS16 catwalks boasted gleaming, healthy and hyper-glowing skin. The standout look for us was seen at Marchesa, where makeup artist Gucci Westman tempered extra glowy, luminous and reflective complexions with a fluoro pink, matte lip. For 2016, step away from the over-contoured Kardashian-style sculpting and spend time creating a beautifully blended highlight on cheekbones, the bridge of the nose, and the eyelid by layering skincare and gleaming skin-finishers. Pairing your glossy skin with a mattified scarlett or berry lip hue will keep the look fresh and modern for spring and summer.

Exaggerated, doll-like lashes were the focus of several designers’ visions in the SS16 shows.  At Marni large-lash clusters were applied to both the lower and upper lash lines for a spidery effect, whilst at Thomas Tait a strip of oversized falsies were applied to the lower lash line for a 60s inspired doe-eyed look. The stand-out for us, however, were the spiked effect pretty-punk lashes, created by Pat McGrath, that adorned the eyes of the Louis Vuitton models. Long, thick, sharply pointed faux lash strips were laid across the outer portion of the upper lashes, whilst on the lower lid, clusters were placed to striking, oversized-eye, manga-style effect.

For 2016, forget the ‘hun’ (half up bun) and embrace its more traditional incarnation instead; the half-up-half-down hair-do. Finding the perfect balance of pretty to edgy, it’s also the ultimate, easy-to-achieve antidote to flat, limp or worn-in second-day old hair. At Vivienne Westwood’s Red Label, the focus was on texturised tresses, with salt-sprayed and separated strands pulled back into a messy half-bun, whilst at Altuzarra hair stylist Odile Gilbert took a softer approach to the style gently twisted strands back around the head and joining at the base of the crown – a nod to the 70s revival of late.

A resurgence of (wearable) colour for eyes has long been overdue, which is why the tropical, hot hues as seen at Alexis Mabille and Diane von Furstenberg couldn’t be more welcome for spring/ summer. At Alexis Mabille, a palette of lime, cyan and hot pink blended all the way to the brow popped against fresh, pared back and dewy skin (and a distinct lack of mascara). Whilst over at DVF, makeup maestro Pat McGrath channelled the designer herself (based on a 70s photo) by blending shimmering shades of teal and sky blue over the upper and lower lash lines for eyes that ‘look alive, like butterflies’. This season is not the time to be colour-shy.