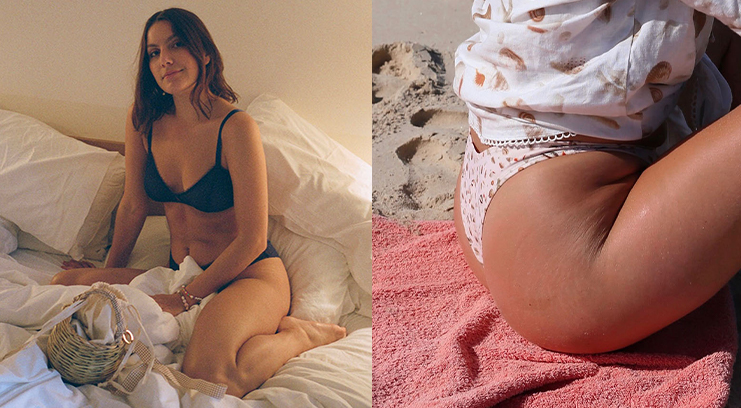 Ten years ago, the phrase “body positivity” might not have meant much to most people. But now, it’s a phrase we’re familiar with seeing on Instagram, in magazines, and amongst hashtags. For many women the has encouraged them to love their bodies as they are. But as the movement has progressed, it’s become evident that it doesn’t work for everyone.

We’re told that we should feel good about our bodies, but it’s not always as simple as saying “you should just love your body, problem solved!”. We have to accept that insecurity, mixed emotions, and negative thoughts are all part of being human, and removing the ‘goal’ of ‘body positivity’ makes our own individual versions of acceptance more accessible.

We spoke to Emma Hoareau, a beauty influencer and photographer who often writes about her experience of self-acceptance and body image.

You’ve spoken online about your feelings towards the phrase ‘body positivity’. What is your take on it?

I’m not against the term; I just find it is sometimes used incorrectly. If someone wants to declare themselves body positive then that’s great, I just think (since I have been on the receiving end of this) it’s odd to call someone body positive. I have never said I am ‘body positive’ online yet it’s something I’m often labelled. Now don’t get me wrong – I’m glad people can see themselves in me and learn how to love their body through that – but I wonder if I was a couple sizes smaller, I would be called this? I’m a very average size ten and it baffles me that even in today’s world (and media) liking, enjoying, and photographing my body is deemed to be part of movement rather than, say, just normal.

Why do you think it’s important to think about and question this subject, and go beyond the idea of ‘body positivity’?

For me body positive insinuates there is a body negative. As women it’s likely we’ve all had our troubles with the image we see in the mirror, and I don’t think you’re ever fully ‘positive’ about your body – it’s always an on-going thing. And for those who do feel more negatively about their body sometimes, ‘body positive’ can become just another thing to compare yourself to.

What do you prefer to say instead of ‘body positivity’?

Body neutral? I don’t know – just ‘body’! I’m totally for the idea of us all loving our bodies, but this should be the norm rather than an in your face movement. It should be so ingrained in us that we don’t then feel bad for not feeling body positive or struggling to see our body as such.

What personal journey did you go on to reach this opinion?

It’s been a long one, of course. I used to be a gymnast and was too tall for it and always felt like I stood out, like my body was ‘wrong’ in comparison to my fellow gymnasts because I had hips. I struggled with eating disorders as a teenager and always compared myself to my friends. In my head, whoever was skinniest, won. It’s so horrible to even write down now, and I know it’s still a prevalent thing for so many women even at my age (29).

It was when I was on holiday with a friend of mine (in my opinion she was better than me because she was long, lean and muscly) when she complimented me on my curves. I was shocked – I genuinely thought she was playing a joke on me. And then I realised, even the girl you think has won the body lottery still looks at other women and wants part of their body! How ridiculous we all do this! From that moment (it wasn’t instantaneous but that’s what set it off) I made a point to look at my body like I would if it were someone else’s – see the good parts, focus on the positive.

What is your personal approach to embracing your body?

Realise how wonderful your body is – it allows you to do so much in this life, and that should be celebrated! Not put down because of a couple things you deem ‘bad’. Embrace it – literally – give yourself a hug. Tell your body you love it, thank it for being there for you. Look in the mirror – pick out the things you like about it and focus on those. Eventually the ‘bad’ parts you used to dwell on will just disappear.