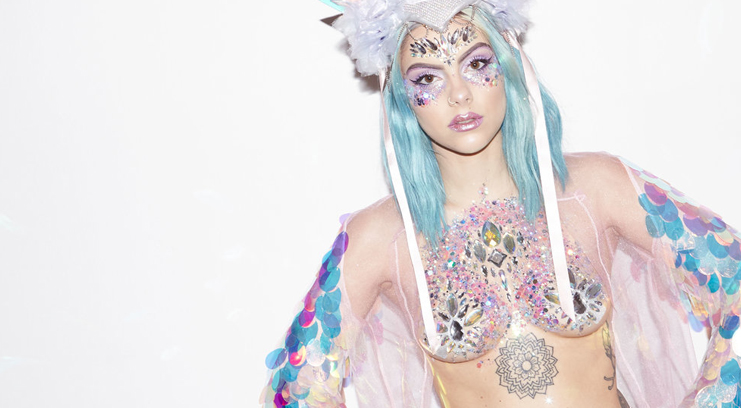 Glitter – originally the preserve of pre-schoolers and crafty types – has soared into popularity in the beauty-sphere, largely thanks to Instagram.

There are certain beauty trends that have become the default aesthetic of festival season – waterfall braids, flash tats, and face paint. Add to that list, glitter boobs, an eyecatching #lewk that is guaranteed to get you featured in festival street-style galleries.

When we launched The Gypsy Shrine (a brand specialising in body art and glitter), the EDITed team were immediately divided over the idea of glitter boobs, but curious beauty editors Rosie and Grace both toyed with the idea of a product review – Rosie being a self-confessed glitter addict and Grace being the type who’ll try anything (in the name of beauty).

If it sparkles, I’m in. From smaller disco events, to summer’s dance festivals and the obligatory pilgrimage to Ibiza, my glitter kit has become somewhat of a staple. So when I saw iridescent décolletages filling up my Instagram feed I was immediately obsessed.

Not just a sprinkling of sparkle, to achieve true “disco tits” requires serious layering. For modesty I started with silver costume tape in silver and then carefully placed The Gypsy Shrine’s aptly named Boob Jewels over the top. Then, the entire area was smothered in a mix of my favourite, chunky mix glitters in lilac, pink and silver tones and hair gel for adhesive. It looked unreal. Shimmering from every angle and turning heads all day.

Granted, I felt a little breezy, but teamed with a sheer, lace top the final look was really gorgeous and it honestly didn’t look too far removed from a sparkling bra. So much so that 6 separate girls each complimented me – a true measure of how successful the challenge was. Would I try it again? Try and stop me.

Admittedly, I was sceptical from the get-go; most Instagram trends are Instagram trends for a reason, right? The fact they look way better in a super-styled, over-filtered image than they do IRL. But I’m always game to try anything once, and compared to the 30% acid peel I tried last week, glitter seemed pretty harmless…

First up, glitter boobs is a time-consuming process, but there’s not a lot of skill required (apart from some obvious precision placement of rhinestones) – the basic premise is smothering your chest in glitter and gems until you sparkle appropriately (and don’t look naked).

Granted, the final result looked pretty cool (and makes for great #content at least), but the idea of wearing nothing but glitter in a field packed with sweaty, over-friendly (glitter boobs are NOT hug-proof), dancing people, all with a strong chance of rain (because y’know, Britain), is not something I can quite get on board with. Plus, as I’ve learnt this week, removing glitter is not fun at all; and it gets everywhere – towels, carpets, boyfriends – you name it (although there’s something kinda fun about sparkling bedsheets).

On a dry day, at an event that doesn’t involve quite so much movement/close proximity to strangers, I might be tempted to try glitter boobs again – they look great, and god knows I love a beauty statement – but for now I think I’ll stick to my band tshirts.

Think of this as the centrepiece to your glitter boob look, perfect for breaking up a straight wash of sparkle. Designed for long-wear, this will last all day (seriously, you’ll need oil to make it budge. Plus, if you’re the more reserved type and don’t fancy baring all, this looks great with a plunge neckline dress or low-cut top.

Suitable for face and hair as well as body, these pots are more than just Instagram fodder that looks super pretty on your dresser. Each is jam-packed with loose holographic glitter in a variety of shapes, sizes, and colours. Pack onto the centre of your chest, then sprinkle a little lighter for a delicate effect as you work your way outwards.

Designed for strategic placement, these press-on rhinestone jewels are the essential staple to any glitter boob look – although we’d recommend nipple covers underneath for extra coverage! Once you’ve painted around the boob with glitter, simply peel off and stick right on – no additional adhesive required.