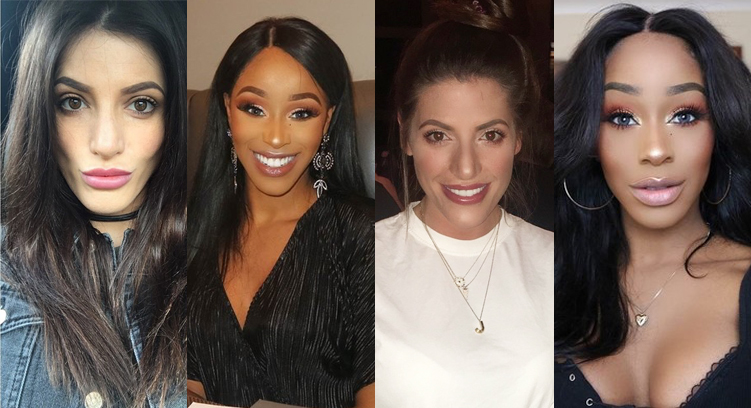 We caught up with Surival of the Fittest’s Jenny and Mariam to talk all things beauty, boys, and besties.

Jenny: I definitely don’t clean out my makeup bag enough…

Mariam: I’m guilty of not washing my brushes as often as I should… It’s such a long process so I always avoid it – not cute I know!

When did your love of beauty start?

Mariam: Back when I was in school. I was never the type that got asked out on dates and I was picked on a lot at school for my appearance. My love of makeup started out as a way to improve how I looked but it ended up becoming a passion because you can be so creative and artistic with it.

Jenny: I’m the other end of the scale! I didn’t get into beauty until I was about 23, so quite late really!

Mariam: Nooo, I’d choose lipgloss over mascara any day. You want those lips to be kissable at every point of the day.

Mariam: Yeah but makeup is so much more fun! It feels so achieving to have a huge makeup collection.

If you could chose one item of makeup, what would it be?

Mariam: I’m gonna go with eyebrow pencil. I literally have zero brows (haha) and ensuring my brows are always pencilled in means I can still feel good!

Jenny: I once went on a really big night out with the most amazing, glam makeup that I’d spent ages doing – but I’d forgotten to put on mascara…

Mariam: I once stupidly applied a cream based highlighter on my face after setting my face with loads of powder. The highlighter then smeared all of my makeup off my face so I had to start from scratch all over again.

Would you ever sell out your mates for a date?

Mariam: I don’t think I would sell out my mates for dates but not gonna lie, it might just depend on the mate haha.

Jenny: Hell no! I would never ditch the girls for a boy!

Describe the worst date you’ve ever had?

Jenny: I once went on a date where the guy positioned me in a certain seat at the bar so he could watch the football on the TV behind me. He then proceeded to brag about how much he earned and what car he drove. Ew, total turn-off!

Mariam: I once had a cinema date planned but the guy was late so I went for a cheeky McDonalds. He asked me to order him some food (the biggest meal on the menu!), which I had to pay for before he’d even turned up. When we got to the cinema he had the audacity to say “You’re paying, right?”. I told him I felt ill and didn’t want to go to the cinema any more – he was so rude and I don’t appreciate any waste of my time!

How about the best date you’ve ever had?

Mariam: Definitely my horse riding date with Warren – he was super sweet! I’d never been on a horse before and it was even better because we were in South Africa. How many people can say that??

Jenny: It was a really simple one for me – Pic’n’Mix and a film – you can’t go wrong!

What’s a dealbreaker for you? How will you know when you’ve found ‘The One’?

Jenny: Selfishness, that’s a big warning sign. You know you’ve found the one when they put you first, and when their life effortlessly fits in alongside yours.

Mariam: When he says he loves cooking, haha! I hate cooking so if I don’t have to cook then he’s the one.

Mariam: Yeah I’d agree. That way if you’re not feeling it you can just play third wheel on your friend’s date.

Jenny: Both! I can’t pick one – sometimes I fancy a PJ night in and other times I just want to go out and dance!

Mariam: Night in, Wine, karaoke, and food in The One. I know my feet won’t be hurting from being in heels, and I won’t have the hassle of annoying guys trying to get my number because they got me a drink. #GirlsJustWannaHaveFun

How do you know when you’ve found a friend for life?

Jenny: Because they’re the ones who will be there for you in your lowest moments.

Mariam: When they help sort out your weave! It’s not an easy thing to do so only certain people can step up to that plate.

Was it hard to grow friendships in the lodge?

Jenny: It was easier than people would think. There were so many situations where you’d want to turn to your friends but because they weren’t there you start to make new friends, and they provide you with the support you nomrally get from your friends back home!

Mariam: Yeah, you’re around each other 24/7 so you can’t help but talk to each other and find out about one another. You connect so quickly on so many levels so you end up building up a great bond.

Which SOTF girls are you still close to?

Jenny: I am close to a lot of the girls in the lodge, but in particular Georgie and Hayley.

Mariam: I’m really close to Metisse. We had an instant connection and bond in the lodge and she became a huge part of my experience there. I love her to absolute pieces so I can’t wait to see her all the time!